In 07-08, Women’s Captain Katja developed a long-term dream for the Wolfson women. With the (always) invaluable support of Steph, the only remaining senior rower at the time, she began to build a foundation of strong, committed rowers. And so it happened that, in taking over the Captaincy of the Wolfson women after Summer Eights 08, I was fortunate to inherit both a group of fun, dedicated rowers, and more importantly, the makings of an ambitious vision for the year of rowing ahead.

The season started with summer rowing. We toured the English countryside and local waterways, braving the rainy English summer. A composite crew with Linacre came home from Dorney Lake with pots after winning the final of the 500m Maidenhead Regatta W8+ S3 race by over a length. A bedraggled crew returned from Cambridge Autumn Regatta having won pots in a more unconventional style – for making it to the finals of W4+ S2 before being defeated by thunderstorms. But perhaps our most significant win of the summer was legend cox Lemon, who became an invaluable member of the Wolfson women’s rowing family.

And suddenly it was all about planning for the academic year ahead. Over much cake and tea, we talked to returning rowers about the aspects of the previous year that could be improved upon. With this feedback in mind, Coach Lindsey and assistant-Coach Katja were instrumental in putting together an ambitious training plan that carried the senior rowers through the first term, towards Wallingford Head, and onto Torpids.

Iana and Rae became fondly known as the Munchkin Mamas as they spearheaded our recruitment drive and turned new recruits into enthusiastic rowers and coxes. Two crews, Dastardly and Muttley, put in strong performances in the Wacky Races (formerly known as Christ Church Regatta), with one crew going all the way to the finals. The exceptional depth of our women’s squad this year is a testament to the patience and dedication of all of our coxes, to all the senior rowers who spent hours on the riverbank coaching novice crews, and to the hard work and energetic enthusiasm of Rae and Iana in bringing everything together. 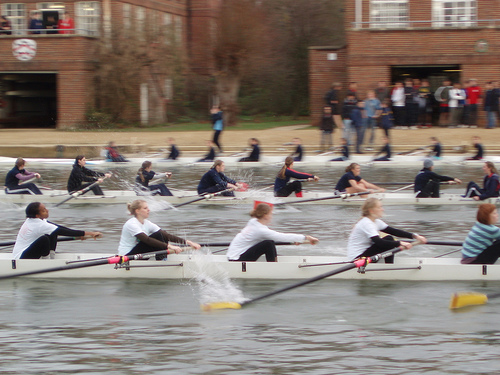 From the end of Michaelmas Term, the weather became colder, novices were novice no more, and the crews came together to work towards Torpids Revenge. We were determined to improve on our Torpids 08 performance, where our only women’s crew was bumped five times. Coach Joe came on board to make our crews faster and more lethal to fish, as Lindsey travelled to Australia for some cycling. We trained through hail, snow and ice: even Dorney Lake was frozen over and had to be replaced by impromptu consumption of hot drinks and baked goods. But the hard work was worth it. Three crews qualified for Torpids, with Vengeance (W1) and Retribution (W2) winning blades, and Cake or Death (W3) also putting in a strong performance.

The week following Torpids, Wolfson entered Women’s Eights Head of the River (WEHoRR) for the first time in WCBC history. We rowed well, and placed ahead of many other University and College crews. Our entry in WEHoRR represented the achievement of not only our goals for the year, but of a goal envisaged by Katja over two years prior. We achieved something that must have sounded, even a year earlier, as an incredibly ambitious dream for Wolfson women.

Into preparation for Summer Eights. As the days got lighter and longer, Coaches Zoë and Lindsey worked closely with W1 and W2 crews in preparing for the event. W3 adopted the crew name Flaming Dragons, in honour of their inspirational Boat Captain Megan D. Not to be outdone, W2, wonderfully Captained by Bel, became known as the Winged Sparkleponies of Destruction. And sparkle the Wolfson women did! W1 bumped up one place in some very competitive rowing. The Sparkleponies bumped up four places and one division, to finish as the second-fastest W2 boat on the river. W3 rowed on in 13th place out of over 40 boats, beating some W1 and W2 crews. In Eights, after some minor bank difficulties, their row over on the final day of Summer Eights was superb. 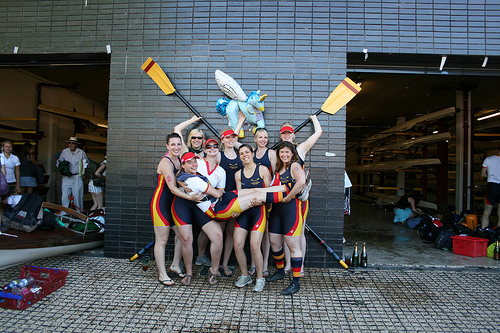 The Sparkleponies celebrate after a triumphant Summer Eights

The success and spirit of the Wolfson women’s crews over the past few years is a testament to the hard work and dedication of amazing coaches, coxes, rowers and supporters (photographers, caterers, cooks, drinkers, lycra-wearers, filmers, other BC Captains…) that have been involved in the team. Sincere thanks go to each and every one of them – you know who you are!!

As season 09-10 begins, I know my successors, Jill and Iana, will continue to reach new heights as they build on the strong foundations that we have collectively established as a women’s crew, and will continue to make rowing with Wolfson challenging, fun, exciting and memorable. I’m looking forward to it!