The Varsity races for openweight women, lightweight men, and lightweight women take place each year at the Henley Boat Races*. This year, two of the strongest Wolfson rowers fought valiantly against the Tabs in beautiful conditions at Henley-on-Thames. 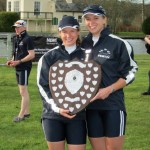 Aurélie Cuénod (bow) and WCBC President Jill Betts (stroke) earned seats in the OUWLRC Blue Boat after a grueling trialing season. Months of training paid off for the lightweight women, as Oxford took the lead over Cambridge off the start of their race. Though both crews rowed crisply with rates over 40 well into the race, Oxford gained clear water 600m into the race. As Cambridge struggled in the choppy water of OUWLRC’s wake, Oxford continued to push ahead, crossing the finish line 1 1/3 length ahead of the Tabs.

Tyler Spencer‘s race from the stroke seat of the OULRC Blue Boat was much more gutting. Cambridge picked up a slight lead off the start, but the Oxford lightweight men pushed back aggressively. Holding a powerful rate 35 compared to Cambridge’s frenetic 39, Oxford continued to challenge the Tabs throughout the race. Umpire Sir Matthew Pinsent warned both crews as blades clashed. In the end, Cambridge maintained their lead, crossing the finish line 3/4 length ahead of the Dark Blues.