The Varsity races for openweight women, lightweight men, and lightweight women take place each year at the Henley Boat Races*. This year, as flood conditions moved the races from its traditional course at Henley-on-Thames to the Olympic course at Dorney Lake, Oxford routed Cambridge in all of the Blues rowing fixtures, and two of our strongest Wolfson rowers fought for that victory. 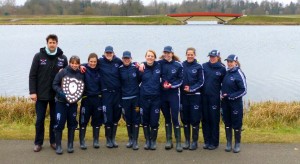 Cynthia Eccles, a longtime member of WCBC, rowed from the 2 seat in the OUWLRC Blue Boat this year. Though Cambridge took a slight lead off the start of the women’s lightweight race, Oxford recovered to even by 500m into the 2k race. Both crews kept up a pace of 34 throughout the race, but Oxford fared better in a gusty quartering headwind, and had taken a length out of the opposition by the halfway mark. They continued to outpace the Tabs, claiming victory by 4 3/4 lengths. 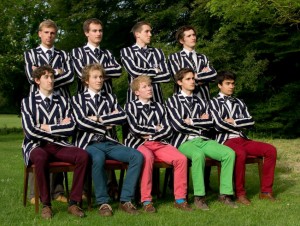 OULRC celebrates their victory over Cambridge.

James Kirkbride, after learning to row with Wolfson in the autumn of 2010, this year earned the bow seat in the OULRC Blue Boat. Both men’s lightweight crews had flying starts, but Oxford managed to gain a bit of a lead in the first quarter of the race. Oxford’s more deliberate cadence proved valuable in rough water, as they extended their lead to 3/4 a length at the halfway point rating 34 compared to Cambridge’s 39. Oxford continued to push off the Tabs, crossing the finish line 1 2/3 length ahead.

* 2014 will be the last year that the openweight women compete at the Henley Boat Races. Starting in 2015, they will compete on the Tideway in London alongside the openweight men.