Wolfson had a strong weekend at the Oxford City Royal Regatta this year. We entered two crews: a men’s coxed four and a mixed double scull.

The four, entered in the IM2 division on Saturday, was a powerhouse crew of James Kirkbride, Jack Hornsby, Matteo Gianella-Borradori, Phil Becker, and Stef Wragg coxing. Their first race, against London’s Putney Town RC, went smoothly. Wolfson took the early lead and kept at it, winning by about five lengths. The second race, though a bit more fierce due to headwind and wash, turned out similarly; Wolfson beat out London’s Sons of Thames by about five lengths. The finals were a bit more of a challenge, against a Welsh Llandaff RC that they had faced before. Rating in the 40’s off the start, Wolfson found that they were about a length and a half ahead by the time they hit their stride. After another big push at 750m, Wolfson won the IM2 title by four lengths.

The four was scheduled to race again Sunday, but had to scratch — the Saturday victory had moved them up a level, and they were no longer eligible for IM2! 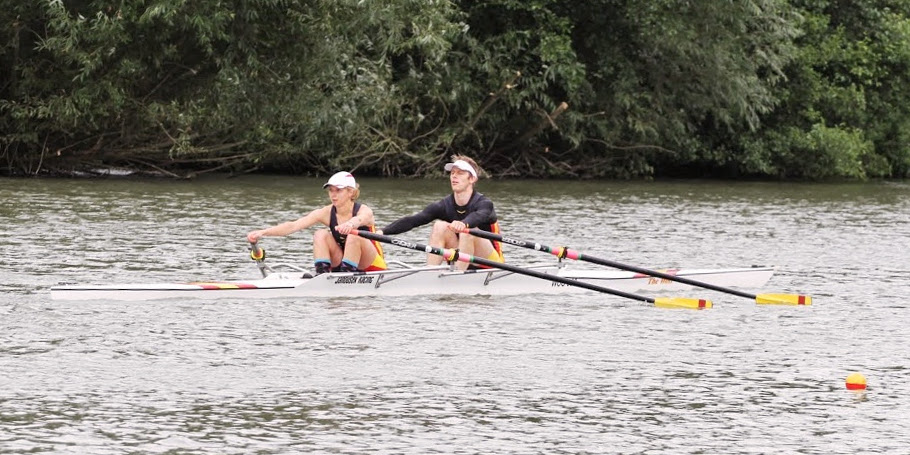 The mixed scull, entered in the elite division, was powered by two experienced Wolfson coaches, Jill Betts and Toby Reinicke. They were up against Hertford College first, going through to the semis with an ‘easily’ verdict. They then came up against an Army/Maidenhead composite (the bloke, I am reliably informed, was well stacked), who managed beat them by a length. Not a bad performance for a pair of coaches on three outings!