The Wolf Pack had a strong showing in Nephthys Regatta 2014, a local race on the Isis run by the Oxford University Lightweight Rowing Club. The race has both novice and senior categories, with novices using it as a warm-up for Christ Church Regatta while seniors enter to see the fruits of their Michaelmas training.

The women’s senior four, coxed by John McManigle, shot up the river with the bladework of June Sun (bow), Fuchsia Hart, Amelie Hartmann, and Sabine Parrish (str). Unfortunately the women lost their first race to a strong crew from University College. The men and women also each entered a novice eight. The women’s boat, coxed by Sabine Parrish, was powered on by Anne Coventry (bow), Flannery Cunningham, Prachi Naik, Anna Khanina, Annie Bochu, Nichola Kitson, Jessica Dunham, and Lea Sefer (str). After the women had gained a huge lead on New College, a wayward crab snatched away the victory. The women, however, emerged hungry for glory at Christ Church. 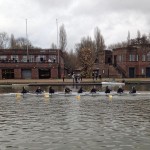 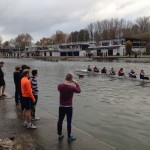