In a streamy race that had experienced- and senior-status coxes scrambling to steer every novice boat from the Oxford Colleges, Christ Church Regatta 2014 was raced with largely sunny skies and largely hungry Wolves. Wolfson entered one women’s and two men’s eights, and racked up a number of wins.

The women’s boat, coached by Sabine Parrish, Stephanie Solywoda, and Iana Alexeeva and coxed by John McManigle, was powered by Anne Coventry (bow), Mariana Cruz, Prachi Naik, Anna Khanina, Annie Bochu, Nichola Kitson, Jessica Dunham, and Lea Sefer (str). The women had a fantastic set of races. On Wednesday, they secured their place in the main draw with a crushing defeat of Hertford by three lengths. This gave them Thursday to rest. On Friday, they quickly dispatched Jesus B by 2.5 lengths before getting revenge on New College in a well-contested race (3/4 length).

Saturday, the women arrived ready to take charge in the final divisions. Their first race — the quarter-finals — was against a strong Green Templeton crew, which the Wolves defeated by 2 lengths. Unfortunately, in the semi-finals, the ladies fell to Regent’s Park in a hotly fought race (1 length). In the 3rd place race, Wolfson rose to defeat Jesus by a verdict of “easily”. This performance was Wolfson’s best in living memory, and likely the best in the history of the Wolfson women. The ladies emerged with victory in their bellies, ready to enjoy a well-earned dinner and go on to train for bumps. The men’s first boat, coached by Shelley Pearson and Matteo Ginelli and coxed by Sofia Hauck, was powered by Keven Schlegel (bow), Hao Chin, Ward Nusselder, Christian Vaas, Jamie Collier, Alexander Edwards, Philipp Schafer, and David Asker (str). The men also had a successful campaign, beginning with their defeat of Magdalen on Wednesday (1 length). Thursday, they vanquished Exeter B by three lengths, and Friday the men trounced the St. Catherine’s C boat easily before fighting off St. Benet’s by two lengths. Unfortunately, the men of Brasenose managed to score a victory off of the Wolves in the quarter-finals on Saturday, edging them out by 3/4 length. The men held their heads high (and, at the dinner, their wine higher) and vowed to translate their speed into bumps come Torpids.

The men’s second boat, also coached by Shelley Pearson and Matteo Ginelli and coxed by Stefany Wragg and John McManigle, was powered by Brian Chu, Erkin Erdal, Niraj Welikala, Josh Combs, Peter Treherne, Isaac Turner, Zach Alfred, and Ken Ishikawa. On Wednesday, their race was aborted when a Balliol crew was having a difficult time landing and obstructed the racing line. On the Thursday re-row, the men defeated a strong Lincoln B crew by 1/2 length. Unfortunately, the men fell to a powerful Trinity opponent on Friday. The Christ Church Regatta Dinner, held at the Wig and Pen and organised by social secretary Sofia Hauck, was a huge success. Toasts and speeches were made and limericks were recited:

Those strong novice women from Wolfson
Who were quick at the catch and then pulled some
From their start with a growl
To their victory howl
We applaud our new seniors of Wolfson!
— Sabine Parrish 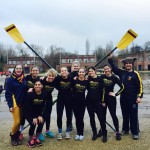 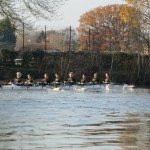 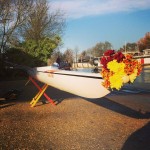 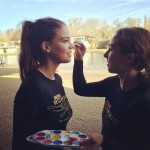 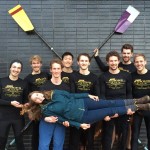 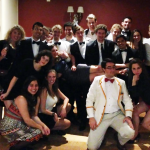