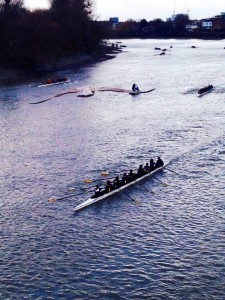 In preparation for the Women’s Eights’ Head of the River Race, Wolfson’s first women headed to the Tideway for the Quintin Head, a 4.6km head race held over the first two thirds of the Championship Course from Chiswick Bridge to the Harrods depository. For many of the crew, this was their first race away from the Isis, and the river could not have been more different: from the novelty of boating in wellies on the Putney Embankment to the sheer strength of the stream, the Tideway was a world away from Oxford’s gentle currents and pleasantly solid landing stages.

The ladies had been warned to expect a long wait during marshalling, but nevertheless the long row up to the start and the hour-and-a-half of sitting still while crews all around moved into position certainly left many members of the crew feeling the chill. Thanks to some strategically-bought “Hot Hands” hand-warmers, though, the crew of Nikki Kitson, Anne Coventry, Fuchsia Hart, Jess Dunham, Lea Sefer, Annie Bochu, Sabine Parrish, Sofia Hauck and Edward Mills (cox) had regained some semblance of feeling in their limbs by the time they had spun ready to race, coming under Chiswick Bridge and onto the start as crew 207.

With Nikki laying down a strong rhythm from the stroke seat, Wolfson came through the 60 seconds at 30 strokes per minute, settling onto a powerful 28 on the approach to Barnes Bridge as they mercilessly opened up the gap on UCL behind them. Their rhythm also began to make an impression on Auriol Kensington in front, who were reeled in to one length by the bandstand. Some tenacious steering from their cox, who refused to cede the racing line, fired up both Edward in the cox’s seat and inspired the ladies to give them no quarter. With crew 206 forced out of the stream, Wolfson moved through them powerfully, taking a seat every two strokes as bowside’s blades came perilously close to clashing. While the move away from them perhaps wasn’t as decisive as it could have been, the crew reached Chiswick Steps with a quarter of a length of clear water, which they continued to open up as the race progressed.

HSBC, crew 205, were next in the crew’s sights. This time, Wolfson ground them down more steadily, finally taking them on the inside as the river swept around towards the Eyot. It was here that the “Wolfson walk” came into play, as the ladies lengthened out and drove down the legs hard, leaving the opposition with the proverbial door slammed in their faces and subsequently nailed shut. As the ladies approached the final 500 metres of the race and passed under Hammersmith Bridge, the shouts of family members on the bridge buoyed them on — “they’re cheering for you, girls!” — and the gap on the next crew was closing still more as Wolfson crossed the line.

While it was by no means a perfect race, there was no doubt that all those involved benefited immensely from the opportunity to race on the Tideway ahead of the “main event” that is WEHoRR. Such a strong showing provides a solid platform going forward, as well as demonstrating that, despite being comprised of relative newcomers to the sport and barely scraping into the IM3 category, Wolfson’s W1 is a force to be reckoned with. As Wolfson’s Women’s Chief Coach, Tom Chapman, said after the race, “I couldn’t be more happy with our first trip to the Tideway. Now we need to get back to Oxford and continue to grow.”

Wolfson would like to thank Thames Rowing Club for their hospitality and Jön at Jesus College BC for his help on the day in collecting race numbers. 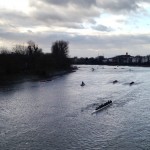 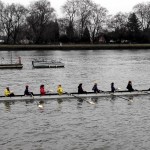 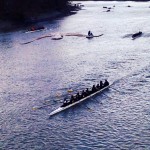