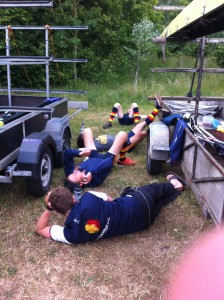 On Saturday, 18th June, a IV+ consisting of Lucian Purvis (str), Thomas Aarholt, Jasper Barth, Neil Dhir (bow) and Stefany Wragg (cox) joined a large field of competitors with designs on qualifying for Henley Royal Regatta at the Marlow Regatta, held at the 8-lane London 2012 Olympic Venue, Dorney Lake. Determined to get some good time trial and side by side practice in, they entered both the IM2.4+ and IM1.4+ categories, with two time trials and two 6 lane, side-by-side finals. Unfortunately, due to massive errors with the timing system, Regatta Master, a number of the time trials were glaringly inaccurate. Nevertheless, in IM2.4+, Wolfson placed 8th out of 20, including a number of international crews, and raced to a respectable second place in the 6-lane ‘B’ Final, two seconds off the winning Southampton Crew. In IM1.4+, they placed fifth out of six, but improving their time by over ten seconds from the previous final.