Women’s Eights Head of the River Race (WEHoRR) is one of the largest female-only rowing events in the World; with 2,500 female rowers competing in 320 boats in a time trial race over the 6.8 km Championship Course from Mortlake to Putney on the outgoing tide. This year for the first time, Wolfson entered two crews in the race.

The women’s first boat were expecting the worst from the weather on the Tideway in early March, however as they lined up they were greeted with flat water and pleasant spells of sunshine. It wasn’t to last – as they were about to turn to start the race, dark clouds started rolling in but W1 didn’t let it affect their performance.

W1 quickly gained speed and a strong push at the start line set them into a solid race rhythm at rate 30. The first km was uneventful, pushing hard and easily passing Liverpool Victoria, the crew immediately in front. Then just after Barnes’ Bridge the storm hit; W1 rowed straight into a very strong headwind with heavy rain, hail, and large waves. But W1 didn’t let it phase them – with waves breaking into the boat they kept their rhythm and continued to push off a floundering Liverpool Victoria. Then after another kilometre the weather cleared – W1 were back in clean water and quickly found their pace again at a solid rate 32.

Nothing in front could hold them off as W1 headed fast towards Hammersmith Bridge. As they came around the Hammersmith bend, W1 knew that this was the final stretch – a sprint for the finish, the wind now behind them. With the crowds on Hammersmith Bridge cheering them on W1 stepped it up a notch and pushed on, passing several more crews. As W1 passed Fulham Football Club, the finish came into sight and they put on a final push for the finish to secure their time.

It was a strong race throughout, W1 kept their heads in the boat and stuck to the race plan. The women finished with a solid time, and despite the conditions that they had to deal with W1 were still the 3rd fastest Oxford College crew entered. 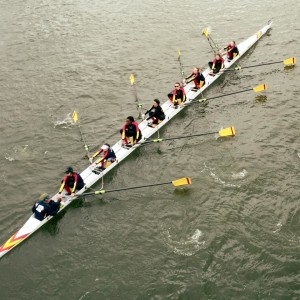 Wolfson W2 had such an exciting race. Stuck in the swells of the lowering tide near the Ship, there was no time for reading or jelly babies, and minutes before they turned to race, they were stricken by a fierce sleet storm which pummelled them for a solid 2 minutes. Thus sufficiently miserable, they spun and started off strong at a solid r30, much higher than they had anticipated, and tapped it along, with excellent pushes as marked out by our coach, Beth, at Chiswick Pier, Hammersmith Bridge, and … somewhere between there and the end. They were overtaken early by a fantastic Imperial crew, but from Chiswick Eyot on they began to reel in other crews, and needled their way through a fantastic 5-way sandwich coming under Hammersmith Bridge. All the way they were pushed on by a probably faster St Andrew’s crew, who just couldn’t find the fast water to overtake until the very end at the Black Buoy, where the two crews had an exciting replay of Christ Church Regatta- a 600m side-by-side sprint for the finish! It was an exciting solid row that the crew is very proud of and keen to repeat in future, finishing a fantastic 123rd of 297 crews, moving up 62 positions and within 15 seconds of the first boat.