Wolfson’s top boat had a pretty boring, solid row- which is about all you could ask for in a Tideway Head. After a relatively uneventful marshalling, Wolfson set off in rather difficult conditions at a solid race pace, keeping it long and powerful but tapping it along through the first half of the course. Stuck between crews ahead who were just a touch quicker and a much slower City of Sheffield, Wolfson had its own race with strong pushes on Chiswick Eyot and coming under Hammersmith Bridge to the shouts of its supporters, from which point they picked it up nicely, settling onto a slightly higher rate and tapping it along nicely until its next push at Craven Cottage. They had a really strong final 1k, pressing all the way through the finish. We celebrated the row with ribs and pints at our traditional post-race watering hole, the Blue Anchor.

It was a row that crew can be proud of, and the strongest result Wolfson have seen this side of the 2000s, coming in at 144th of 335 competing crews, after starting 190th. We were the second fastest Oxford college of thirteen, setting up Wolfson for a strong training period ahead of Summer Eights. 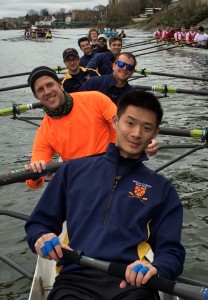 The short weeks of prep before the race were marked by some urgency — stern pair from the Torpids second boat was moved up to the first boat following injuries there, and combined with one unavailability, three new members were introduced, including a mercenary from Merton College. A string of illnesses in this newly assembled crew the week before racing set our expectations somewhat low. Nevertheless excitement was high, as none of the crew had ever participated in Head of the River, though a handful had been to the Tideway in other occasions. Which ones were which became evident when only five of the nine crew members took the warnings to “bring wellies!” seriously.

Boating from Quintin meant quite a relaxed start to the race, with a short warm up and plenty of opportunity to watch the first 100 or so crews set off the start.

The race itself began with a rather unfortunate overtake. The very large Tyne United crew which had been eyeing us suspiciously during the entire marshalling period overtook our boat cleanly (if somewhat slowly) during the first kilometre, leaving a very large gap behind us for the rest of the race. Nevertheless we must thank them for setting us up at a good rhythm, with a solid rate 30 which carried all the way to end. The only exceptions to that were occasional dips to rate 28 just before Barnes and Hammersmith Bridges, where the stream and gusty winds combined to create waves of magnitudes never seen on the Isis and the lack of Tideway experience was felt. Revenge was had in the last kilometre, where we had clean overtakes on two crews, first 248, the second boat of St Aidan’s College in Durham, and then right over the finish line, 243, the second boat of Bedford. The long ergs performed during the bouts of red flag proved their worth then, as we picked up speed for a finishing burst as the crews around us floundered.

We paid for our relaxed warm-up with the returning row, covering about eight kilometres to Quintin. Some help from the Pirates of the Caribbean soundtrack and some London sightseeing made the time go by a little faster.

We started in position 252 and finished (at least in the provisional results as of this writing) at 259, a respectable outcome considering multiple illnesses and inexperience.