Wolfson entered a total of six boats in Torpids, three men’s and three women’s crews. Our first boats achieved record highs during the week, but then were struck by bad luck. Meanwhile, all four lower boats celebrated historic results, with W2 winning blades!

The Women’s 3rd Torpid started the week well for the club. With Somerville II hot on their tails they closed on University II. They piled the pressure on, and Univ cracked and caught a crab before Donnington Bridge, allowing W3 to bump, with only three-quarters of a length between them and the following crew. On Thursday, Somerville II gained again, and Regent’s I ahead bumped out on Worcester II before the bridge! But W3 settled onto a strong rhythm and held Somerville at a length before catching Worcester in the gut. Somerville also went on to bump Worcester, meaning that the third day began in much the same way. Our women gained on Regent’s, and thought that they had the bump. But Regent’s had already bumped out, so W3 had to keep rowing until they passed a New College crew who had crashed into the bank. The final day saw them once again chasing Regent’s and aiming to hold off Somerville. As on the previous days, Regent’s bumped out ahead, and this time W3 did not manage to get the overbump before being caught by Somerville outside Falcon. But they did not let it deter them, and continued on, bumping Lincoln II on the Green Bank! The Boat Club only awards blades if the crew has not been bumped during the week, but the Women’s 3rd Boat can be proud of their four bumps, moving up to 5th in Division 4, their highest ever position! 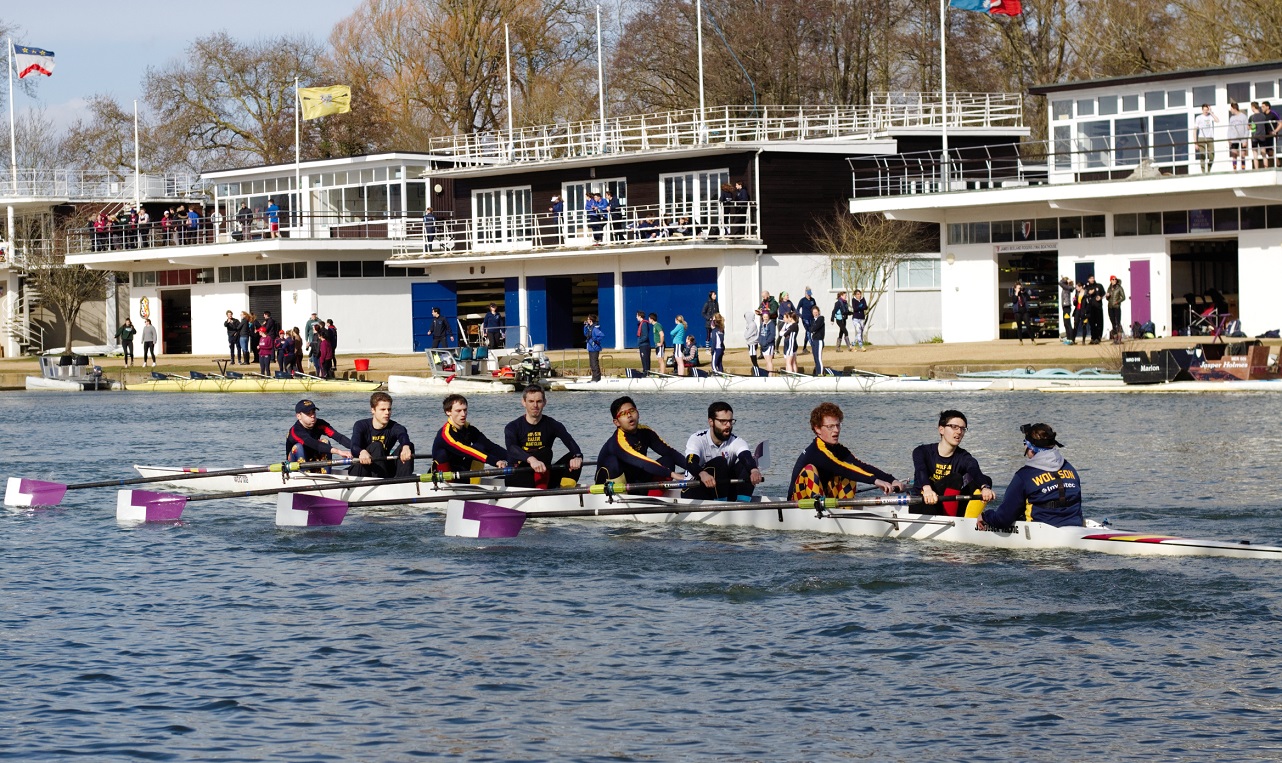 The Men’s 3rd Torpid had a slow start to the week. A close encounter with the bank allowed Merton II to gain significantly, and while M3 quickly wound up to a fast race pace, they were forced to concede. However, Merton did not see the concession and rammed into the boat. The resulting entanglement allowed Regent’s Park I to close in as well, and M3 had to concede again. Having mentally reset, they settled into a solid rhythm and gained on St Hugh’s II, who had started three places ahead. They managed to get the bump outside University boathouse. The second day saw a much cleaner start from M3, and they gained on Regent’s. But Regent’s bumped out on Merton by the Gut, which meant that our crew had to go for the overbump. Despite a strong row, they did not completely close the distance, and ended the day in the same position. However, the next day was a different story, and the 3rd boat managed to bump Merton II at the end of the Gut. On the final day, a slow start allowed Merton to close to a length. But M3 settled onto a good rhythm and were gaining on Trinity III when: klaxon! Swans on the racing line. And so there was no final resolution for the 3rd boat. But they can be proud of successfully defending their initial starting position of 5th in Division 5, M3’s highest position ever in Torpids! 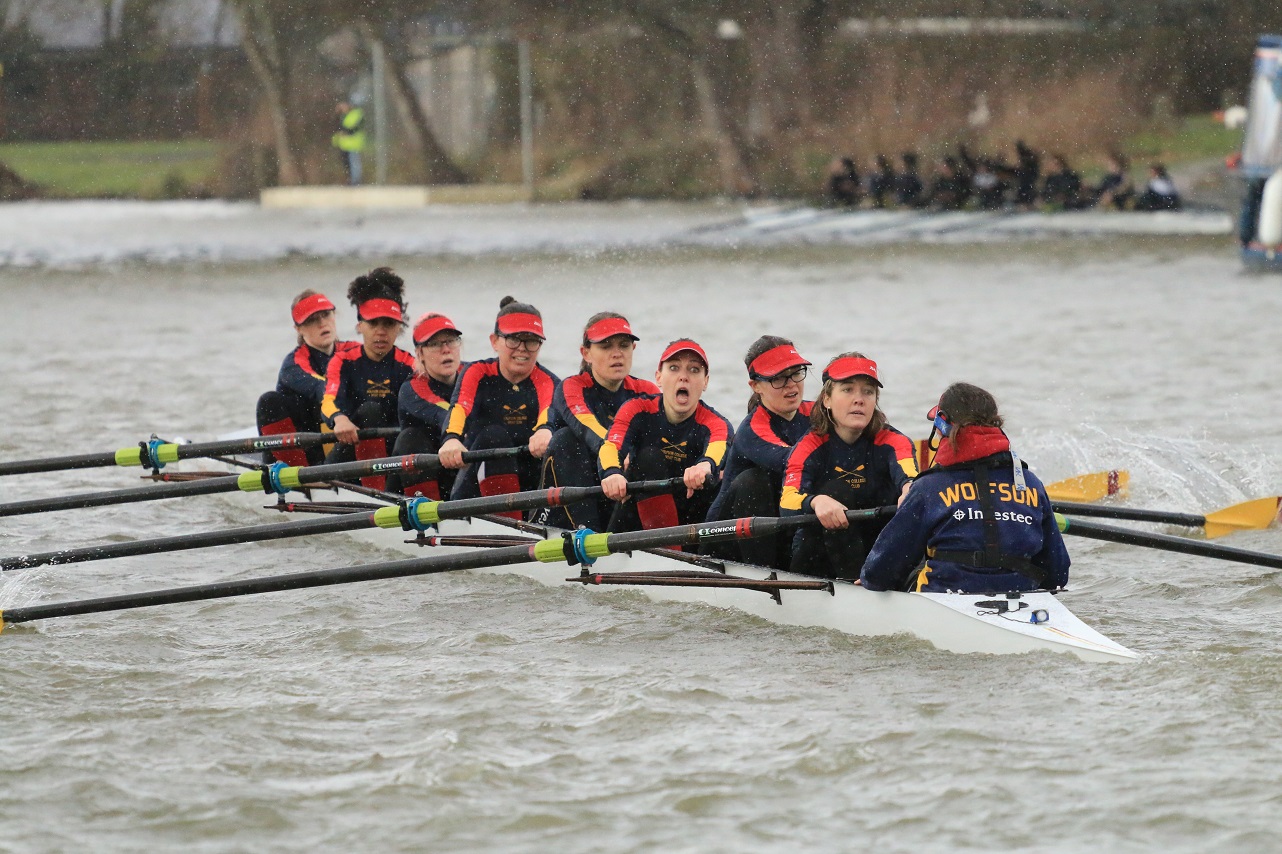 The Women’s 2nd Boat had a relaxed start to Torpids, staying under their standard race rate. Nevertheless, they quickly closed in on Corpus Christi, and bumped before the Gut. Their second race was tougher, as the crew in front of them, Mansfield, managed to get the bump on St Hugh’s before they could be bumped. However, Mansfield swiftly cleared the racing line, allowing W2 a clear shot at the overbump. And they went straight for it, bumping St Hugh’s by the Gut. On the third day, the women swiftly bumped St Catherine’s to move to the head of Division III. This meant that they raced a second time at the foot of the next division. Starting behind Mansfield once more, they had a strong start. But Mansfield bumped out on Brasenose before Donnington Bridge, and so W2 were in it for the long haul. With a solid rhythm, they slowly reeled Brasenose in, finally gaining a concession along Greenbanks. On the final day, the 2nd crew were behind Mansfield once more. And once more, W2 were unable to catch them before they had bumped out on Worcester. But they never faltered, and kept surging onwards. They finally gained their well-deserved bump before the end of the Gut, winning blades! A fantastic achievement: five bumps in four days, moving up to 11th in Division II (W2’s highest position ever in Torpids), and cementing their place as the highest-ranked women’s 2nd boat on the river! 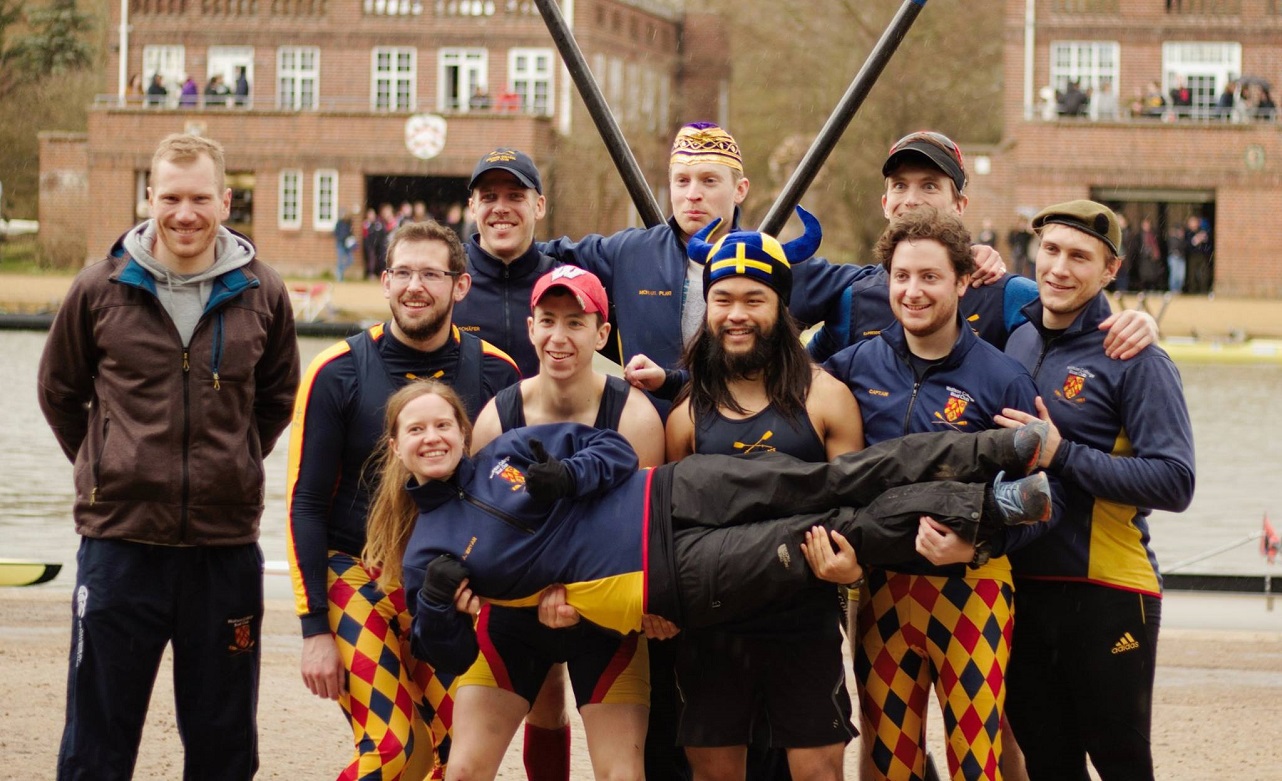 The Men’s 2nd Boat gained fast on Balliol II, closing by the Gut. With half a length of overlap, Balliol refused to concede, and so Allison Bryan, the cox, steered in for the bump, leaving Balliol tangled between blade and bank. The second day saw misfortune for M2, as one of the crew was too powerful for the equipment, and a backstay and pin were broken. As they were unable to make it to the start, St Anthony’s were awarded a technical bump. On the next day, the crew were hungry to make up for the technical mishap, and closed on St Anthony’s by the Gut. But Wadham II were gaining on Wolfson in turn, and the bump was conceded when M2 slowed due to steering round a bumped out crew. In another unlucky turn, St Anthony’s bumped out on St Peter’s before the 2nd crew could bump them, and the river ran out too soon for the overbump. On the final day, M2 started behind the faster Wadham II, and as expected, Wadham bumped out on St Peter’s. Undeterred, the crew pushed on for the overbump on Peter’s, gaining it on Greenbanks. With that bump, their second of Torpids, M2 erased Thursday’s technical bump and regained their initial starting position of 8th in Division 3, M2’s highest position ever in Torpids (you might notice the trend here)! 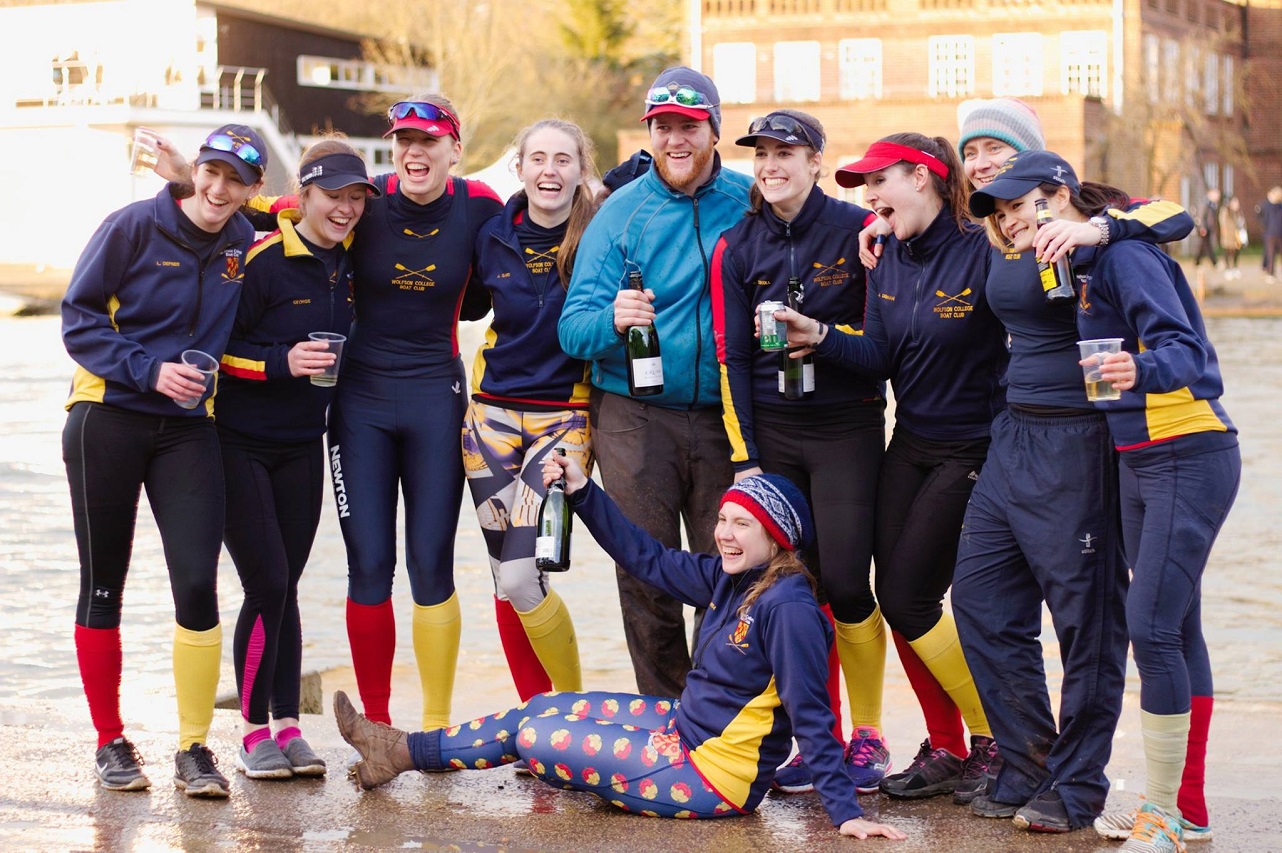 The Women’s 1st Boat set off with a calm determination to truly test their speed against the top half of Women’s Division 1. Gaining swiftly on University, there was no doubt of the result, and a concession was given before the Gut. The next day saw them chasing a falling Magdalen crew, and they got the bump within twenty strokes. On Friday, they continued their dominant performance by bumping Pembroke by Falcon’s boathouse. W1 started the final day at fourth on the river, their highest position in Torpids since 1979 (the second year Torpids had a women’s division). They had a good start and a cracking race, and in the top of the Gut were just a canvas off of Christ Church, and blades, when disaster struck: their rudder broke off. This caused the crew to crash into the bank, where five crews overtook them. After restarting they had to pressure steer, but managed to cross the finish line ahead of Magdalen to finish a disappointing two places lower than they had started the week, at 9th in Division I. A heartbreaking end to what should have been a spectacular Torpids.

The start of the week saw the Men’s 1st Torpid at third on the river, the highest they have ever been, due to Magdalen not entering a crew. In the first race, Wadham closed to half a length, but once the crew settled into a strong rhythm and cleaned up their rowing, M1 started moving away. They finished the day as it had started – at third – showing that they deserved their position. Disaster struck on the second day, with Jasper Barth, the seven man, taken out by vertigo. Despite Michael Plant stepping up from the 2nd Boat, no crew is faster with a sub, and M1 conceded to Wadham within sight of the finish line. Jasper had recovered enough to be in the boat on Friday, when M1 were being chased by a strong St Catherine’s crew. Wolfson were closing on Wadham ahead, when they steered across the river to try and escape the fast approaching Catz boat. Unfortunately, it was not quite enough, and the bow clipped M1’s stern, spinning them sideways across the river. Their restart took them side-by-side with Christ Church, who steered sharply for the bump. The resulting collision pinned M1 against the raft outside Pembroke’s boathouse, and allowed Hertford and Balliol to row past. The second restart allowed M1 to row across the line with clear water in front of St John’s. In the final race of Torpids, the 1st Boat were looking for a bump on Balliol to make up for the previous day. But Balliol managed to find new speed, and finished only a foot in front of Wolfson. M1 therefore finished at 8th in Division 1, five places lower than they began, with bad luck outweighing their moments of good racing.