The past few months have been busy for the senior rowers of Wolfson College Boat Club. After a greatly successful bumps campaign in Summer VIIIs, the wolves kept their noses to the ground and blades to the water through the (sometimes) sunny weather of another English summer. The women were the first to represent WCBC outside of Oxford this summer, sending two crews to Reading Town Regatta in late June, with the men then entering multiple crews in to Kingston Amateur Regatta two weeks after. All crews performed admirably, but none came away with pots nor points…. yet. Henley Town and Visitors Regatta was to change that, when the Wolfson women’s coxed four smashed through the competition in the three-lane, side by side, knockout regatta to take an overall win (and bring home some highly-coveted silverware).

Meanwhile, over the course of the same weekend, the groundbreaking women’s coastal coxed quad was on its way south to Dorset for the first ever British Offshore Rowing Championships. Never before had Britain hosted such an event: a full 4km to 6km race (heats versus finals) with a beach start and finish, requiring the rental of a special coastal boat. But our wolves were up to the challenge, even transporting their sculling blades by bus, train, and taxi, all the way down to their final destination of Sandybanks Beach, where they attended an additional set of training courses the day before the race was to begin. It was worth it in the end: one of the only college crews to enter, they still came 5th out of 6 women’s coxed quads overall (of all levels), and were crowned with the prestige of partaking in an inaugural international-level event.

Wolfson’s next entries of the summer were to be at Maidenhead Regatta in Berkshire, where five competitive sculling crews (a coxed quad, two single sculls, and two double sculls) took to the water meaning serious business. Four of the five entered crews made the finals, with three ultimately coming away victorious as overall winners in their divisions (see summary below for full crew details).

Back on our home stretch of river, Oxford City Royal Regatta and the Oxford City Sprint were waiting, and WCBC was ready. Twelve entries heralded the wolves’ mighty presence for the two days of side-by-side racing, but only two came home with the win and the silverware: our lightning-quick senior men’s sprint 8+ and the unyielding senior women’s coxed quad.

The next month would bring the Isis Sculls to Oxford, and with it, numerous medals and pennants for our fabulous small boats competitors. Five categories were entered for the 1850 meter Head Race, with Stef Zekoll taking second in the Intermediate Single Scull category, and wins being taken in the Women’s Novice Single (W.Nov.1x), Men’s Intermediate Double (IM3.2x), and of course, the now-club-favored Coxed Quad (W.IM3.4x) events. Small boats would again finish out the summer season with a mixed-double, double entry into Milton Keynes RC Regatta. 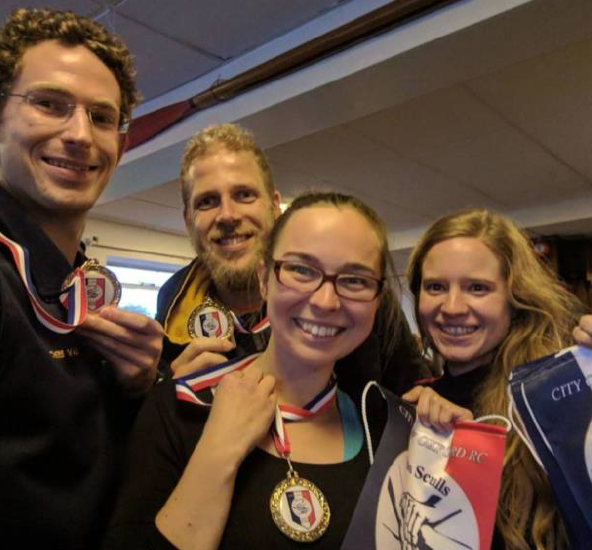 Wolfson shows off on its own home turf at the 2017 Isis Sculls, bringing home wins in 3 of its 5 entered categories. Picture above (left to right) are winners of the IM3.2x category, Chris Vaas and Phil Schäfer, winner of the W.NOV.1x category, Sophie Schauman, and cox of the winning W.IM3.4x+, Allison Bryan. (Photo Credits: Chris Vaas)

In addition to club activities, two of our number, past and current presidents Jessica Dunham and Laura Depner, joined in with the Oxford University Women’s Development Squad this summer, racing alongside members of six other colleges to represent Oxford in the 30th annual Henley Women’s Regatta in June, and ultimately making it to the quarter-finals on the Saturday of racing. Laura is now trialling full-time with the OUWBC squad along with fellow WCBC members Abigail Killen, Sophie Schauman, and Rachel Anderson. Trialling with the lightweight women this year are Ellie Watts (President, OUWLRC) and Jill Betts (Assistant Coach, OUWLRC), and for the open-weight men (OUBC), Christian Cöster and Josh Combs. We wish all of our triallists the best of luck in the coming months!