By Daina Sadurska (with contributions from Jessica Dunham)

Our women’s 8+ boated from Quintin, and having quite some time to spare, had a relaxed warm-up upstream of Chiswick Bridge, before proceeding downstream to our marshalling area. In the warm-up, 7-seat had noticed an odd noise coming from that the gate of 6-seat rigger. Upon inspection it was found to be somewhat loose, but with no time to return to Quintin, 6-woman Serina Lyons made due with her hands, tightening the bottom nut as much as possible. Nothing else could be done in the moment but hope it would hold for the race.

Weather conditions were pleasant, with some light SSW wind. The first divisions rowed past and we moved into the spinning are upstream of Chiswick bridge, ready to race. Our start was low and controlled, as we built up to a race pace over some 10 strokes, crossing the start line at a clean rate 29. Our focus was on the technique, getting our timing and finishes together as a unit. Passing under the Barnes railway bridge, we switched the focus onto a more aggressive race with a power move on the legs. As we approached the Eyot we were noticeably gaining on the crew ahead of us, and were sitting in their wash. Another power move along the Eyot brought us within a canvas of the crew ahead of us, and the chase was on. We pushed onto an overlap with the crew ahead of us and slowly reeled them in, pressing past them seat by seat, really upping our own boat speed. However while we were making our move, the strong St. Andrew’s crew which had started in the position behind us were also making theirs. We held them off as long as we could in their attempt to overtake, adding to the boat speed with urgent calls from cox Daina Sadurska, but at last were finally overtaken shortly before Hammersmith Bridge.

As we passed beneath the Hammersmith Bridge, we could hear people cheering for us, and used that energy for another 3×10 power move off the bridge. This was the final stretch of the race, and the focus now was to keep working in synchronisation, lifting the boat together and pushing towards that finish line. Here the water got a bit more choppy, making that control and timing ever more so important. As we came around the final corner and I could see Putney Bridge, we knew less than a kilometre was left. Working as one, we made the final push through the pain towards the finish, using up every last bit of energy left in the last 500 metres, emptying the tanks completely as we crossed the finish line. The dodgy gate at 6-seat had held, and was still somehow miraculously intact.

Some light paddling followed, and then we had to spin and start the long row upriver, all the way back to Quintin. But would that be an uneventful, relaxing paddle back? Oh no. As we reached the point were we were supposed to cross from the Surrey to the Middlesex side across the racing line, we had recovered enough to cross at with a short high rate burst until… nothing quite like a massive crab at 3 seat, right in the middle of the racing line to spice up the crossing. But despite the panicked shouting from marshals and cox alike, all was well in the end. We got out of the way of any racing crews quickly enough, but the excitement was not over. The dodgy gate at 6-seat finally gave up the goose and disintegrated, losing its bottom nut and washers somewhere just before Barnes Bridge and leaving us limping around the last corner rowing in fours.

At the end of the day, great is the race where all the crazy stuff happens *after* the finish line, and not before it. 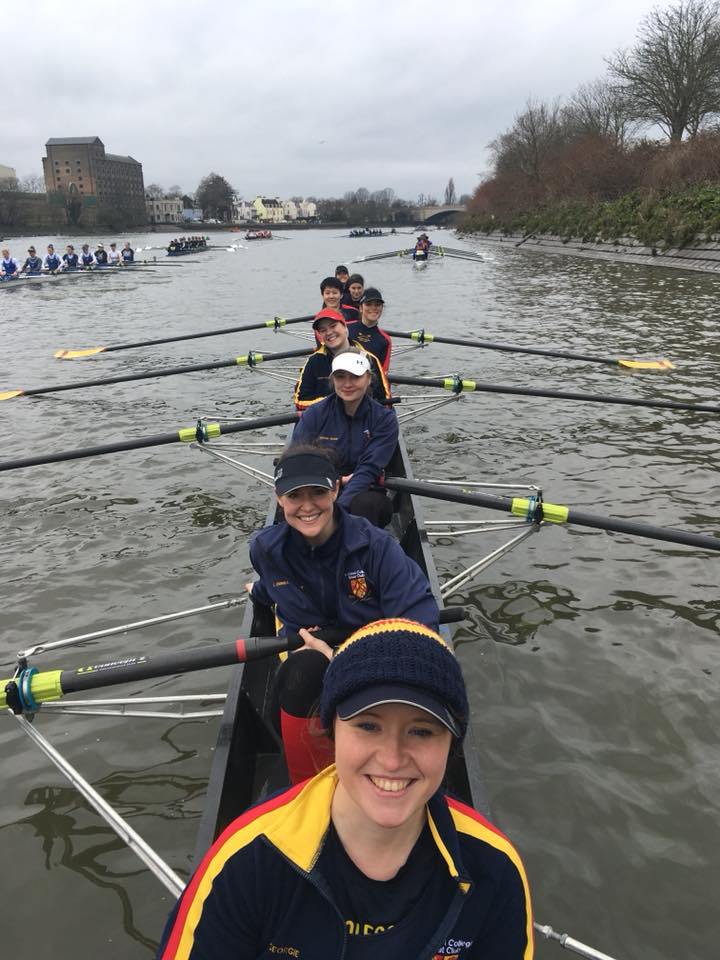