Wolfson College Boat Club had a strong start to the year. In 2019, we celebrated two major achievements: our 50th anniversary milestone as a club and the success of years of steely determination and hard work from our women’s top boat (present and past), as they achieved the highest college rank, Head of the River!

The success of our club continued throughout the summer as we entered our crews in external regattas, such as Molesey Regatta where our men won their division and the women came second in theirs. Continuing on with incredible successes at Henley T&V and Oxford City Royal Regatta. Our women won both their 8+ event and the “super-sprints” during Oxford Royal, and at the same event saw a Wolfson – Wolfson Final with our 4+ crews. Two of our rowers also won the prestigious Mixed Pairs Head competition on the Thames, the Pennant for which is displayed alongside the Head of the River and Most Improved Members Trophy in Wolfson College.

Unfortunately, tides changed dramatically with the beginning of the academic year. It began with country-wide flooding closing our beloved river for most of Michaelmas and Hilary Terms. This was quickly followed by the global coronavirus pandemic, keeping us in lockdown in our homes.

But as the proverb goes, where there is a will there is a way! We were determined to stay sociable and active as a club throughout these trials and tribulations.

The annual Oxford-wide race for beginners, Christ Church Regatta, was cancelled by the floods and replaced by an ‘Ergatta’. We entered two women’s crews in this gruelling relay on ergometers, requiring not only strength and endurance but also agility to achieve quick changeovers between rowers. All this with bellowing encouragements from their captains. Both teams (photographed in the photo below) did extremely well in their divisions, with one losing only to Balliol.

Despite difficult river conditions our squads managed to squeeze in a few external regattas; during Michaelmas term a Womens 4+ and a Men’s 4+ attended Upper Thames Autumn Head and Fairburns Cup respectively. A W4+ then competed at Fours Head of the River Race in London, where WCBC member Miriam Stricker also raced in an Oxford Lightweights crew that won their event. Our last race was Quintin Head, which saw our women compete in two matched VIIIs.

Torpids, our end of winter regatta, was sadly cancelled, and Pembroke organised a tug of war ‘Warpids’ event in its place. During the competition, two WCBC teams of eight huffed and puffed through a couple of challenges next to our overflowing river, with one unfortunately losing to the other and the victors not quite making the finals. 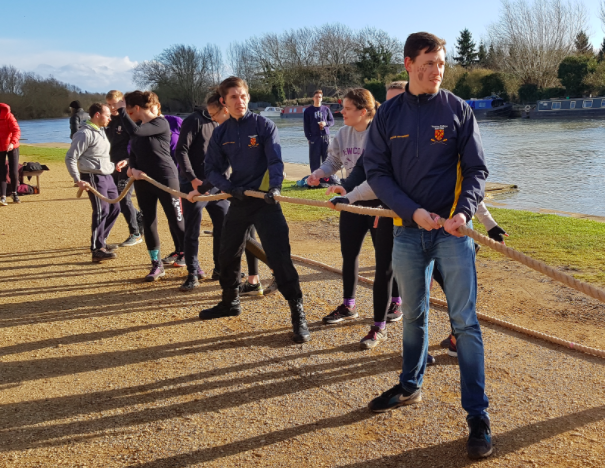 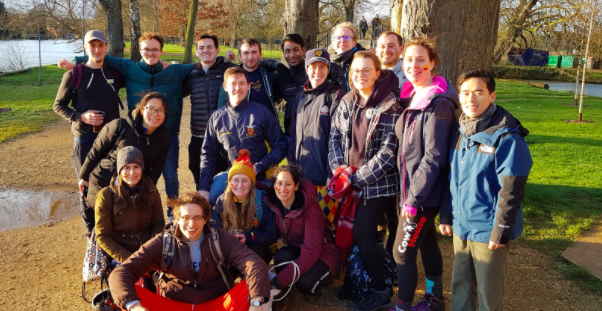 That was the end of our group activities as the global pandemic was afoot only a few weeks later. However, we have not been idle. Our captains have been organising weekly virtual yoga, ballet and circuits sessions, as well as competitions in cycling, running and home sports to keep us challenged and good spirited in spite of the constraints.

During the year, with the club’s three-tier purpose of access, social and performance, my focus was also to increase accessibility for more people, reallocating funding to reduce costs and increase available support for individuals at all levels in the club. In the coming year the club is continuing its efforts in this area and has created a new sub-committee to work on improving inclusivity and diversity in the club.

I am delighted to say that this year’s sponsor, a Wolfson Boat Club alumnus, has kindly renewed his support for this coming year! To our sponsor, the incoming committee and members, I hope that the club’s successes will be plentiful.

As for each year, many of our members graduate from their courses and go on to do wonderful things, to them, I wish the very best of luck and I hope that they will return to Oxford every once in a while to cheer and support new WCBC members racing, and maybe for a Boat Club Alumni Reunion, whenever that may be.

For now, it would seem that the British Rowing is slowly re-opening rowing activities, to those who can, enjoy the river.

To all of you out there, stay safe, for you and others.