We are still investigating the history of the Boat Club, and this page will be updated as we discover more. If you have photos or stories to share about the club’s early or recent history, please contribute them here or e-mail us.

Wolfson College Boat Club first competed in Summer VIIIs on Wednesday 28th May 1969, only 3 years after Sir Isaiah Berlin was formally named the head of Wolfson College, and several years before the first of Wolfson’s buildings was opened. According to The Times, the Wolfson men were caught in their first race by the medics of Osler II, but the next day went on to secure the first bump in College history, against the St. Hilda’s women.

Until the mid-1970’s, most Oxford colleges were single-sex, each admitting only men or only women. As there weren’t enough women’s boats to support a separate women’s division in the bumps races, women raced alongside the men.

In 1974, five men’s colleges – Brasenose, Hertford, Jesus, St. Catherine’s, and Wadham – began to admit women. Within twenty years, most colleges would admit both men and women. (The sole exception, St. Hilda’s, would remain female-only until 2008.) With the increase in women at Oxford came a surge in women’s rowing, and a separate Summer Eights women’s division was finally feasible.

In 1976, ten Colleges came together to make this happen: the five above-named, and four of the five women’s colleges – Somerville, St Hugh’s, St Hilda’s and LMH. And the tenth college? Wolfson, of course! We are proud to have been among the founding competitors in women’s bumps racing at Oxford. Our women began at 4th on the River on the first day of Summer Eights, 26 May 1976. Four days later, we had held that position, having rowed over ahead of St. Catz each day. 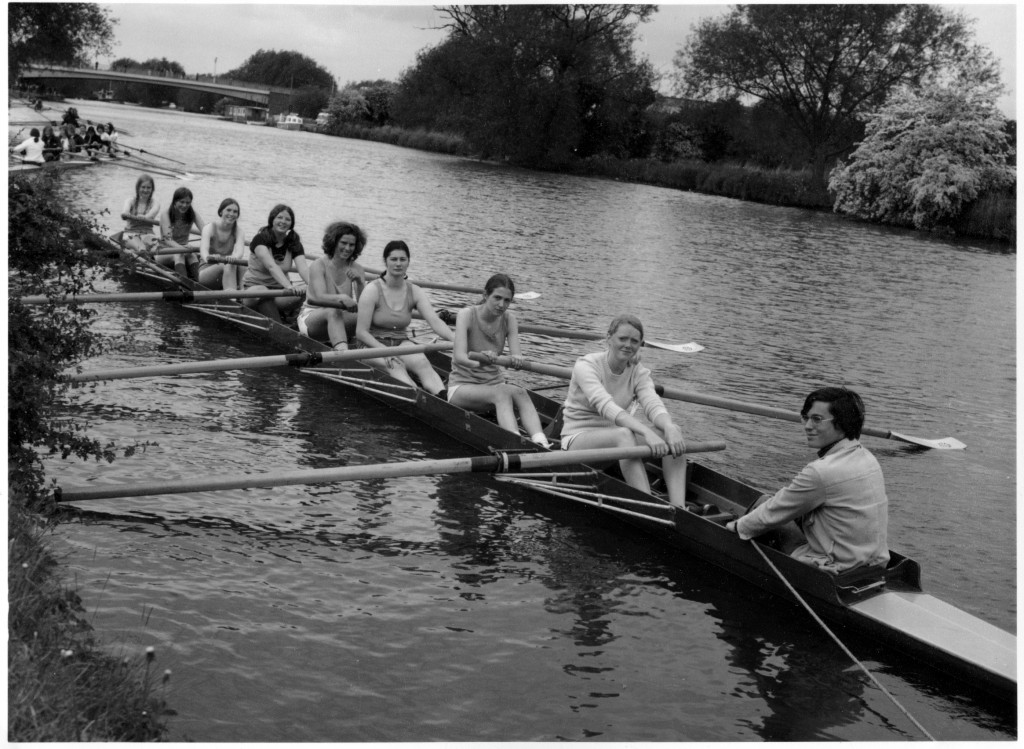 The Wolfson women had an exceptional campaign in the late 1980’s into the early 1990’s. Over those six years, the women achieved a total of 32 bumps, moving up 16 spots in Torpids and 14 spots in Eights, and reaching 4th on the River. They earned blades in Eights in 1986 and in Torpids in 1989.

We are looking for details, pictures, and any other information about the women’s boat club over this period. If you know more, please contribute or e-mail us.

It’s hard to imagine now, but in the 1990’s the men’s boat club struggled. Strangely, during this period the college was always full of experienced, tall rowers, but they all seemed to find excuses why the crew was not good enough for them, or why their honour had been slighted, or that they had a funny feeling in their toe, or that they needed to write their thesis (the least acceptable excuse). 1995 had been a particularly bad year, leaving incoming captain Lars “jumping higher” Wulf with an empty locker.

Lars decided rather sensibly to get cracking on novices as soon as possible, and take advantage of Wolfson’s graduate status to utilise the quiet conditions on the Isis during summer to persuade new talent into the club. Though this strategy wouldn’t reverse the men’s fortunes overnight, it did lead to our historic victory in Christ Church Novice Regatta 1995. Remembering what is still the only time Wolfson has won Oxford’s main novice regatta, Richard Holland — captain of the novice boat and later boat club captain — wrote up his memories of the event in spectacular fashion, which you can read by clicking here.

In September 1999, arsonists set light to the University College boathouse, where Wolfson was based alongside University, St. Peter’s and Somerville colleges. In the aftermath of the blaze, Wolfson boated from a metal shed erected on the side of the river next to the construction site of the new boathouse. Though the Wolf Pack’s temporary muddy home didn’t do much for morale or footwear, their humour lived on. The first boat purchased after the disaster was affectionately named “Firestarter.”

It wasn’t until the spring of 2007 that University College’s new — and rather impenetrable — boathouse would open. Wolfson now enjoys these very modern facilities, complete with sliding boat racks, large garage doors, and a full erg training facility around back.

We are looking for stories and photos from this period. If you know more, please contribute or e-mail us. 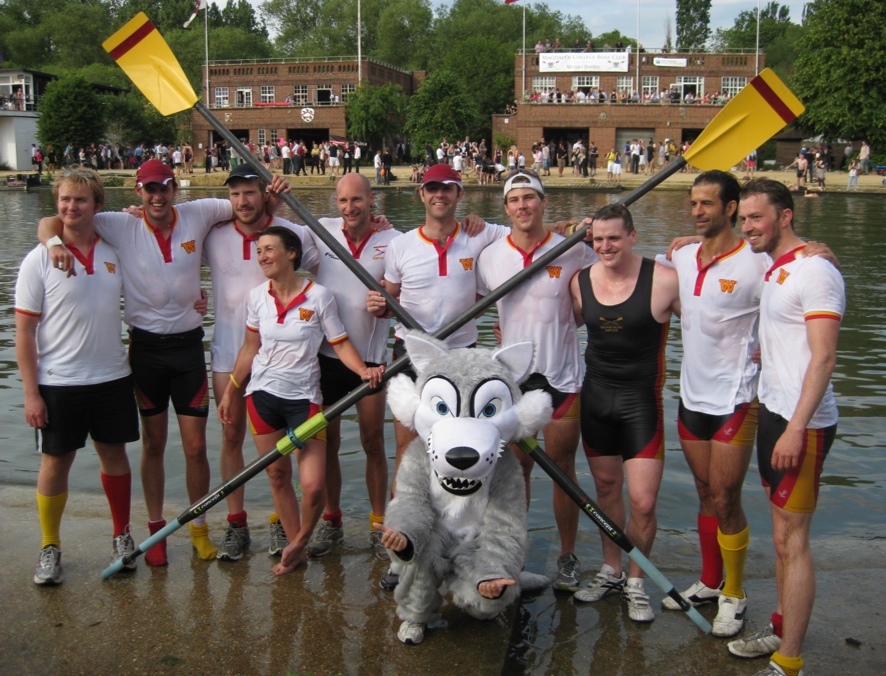 Karl Davies, the steward of Wolfson College, has always been an avid supporter of the Wolfson College Boat Club. Karl has supported the rowing community and has rewarded their success by helping purchase each blade in the bar for successful crews.

In 2013, Karl donated a brooch to the Women’s captains at the Summer VIIIs dinner, the same year that the Women’s 1st VIII bumped into Division 1. The brooch, to be handed down to each Women’s captain, belonged to Karl’s grandmother, a secretary to Lingard Jewelers, which was subsequently bought by Stevenson Jewelers. In her position, she was given this brooch that was kept in the family until it was donated to the Women’s Boat Club Captain.

The competition for the club’s best 2k erg time is immense. In 2011, Cory Kampf, a United States Marine, arrived at Wolfson and set the club record at 6:16. Though a massive score, it would be defeated in 2012 when Duncan England, now a Wolfson college legend, pulled a 6:14. A major improvement to 6:08.9 was achieved by Joshua Combs in 2016. The challenge continues to best Joshua’s record.

We believe the Wolfson women’s 2k record is currently held by Dieuwertje Kooij, another Wolfson legend. She pulled a 7:26 in 2012 while training with the Blues. There are rumors that Laura Addis might have had a comparable score, but we don’t know what it is. Can you help? E-mail us! 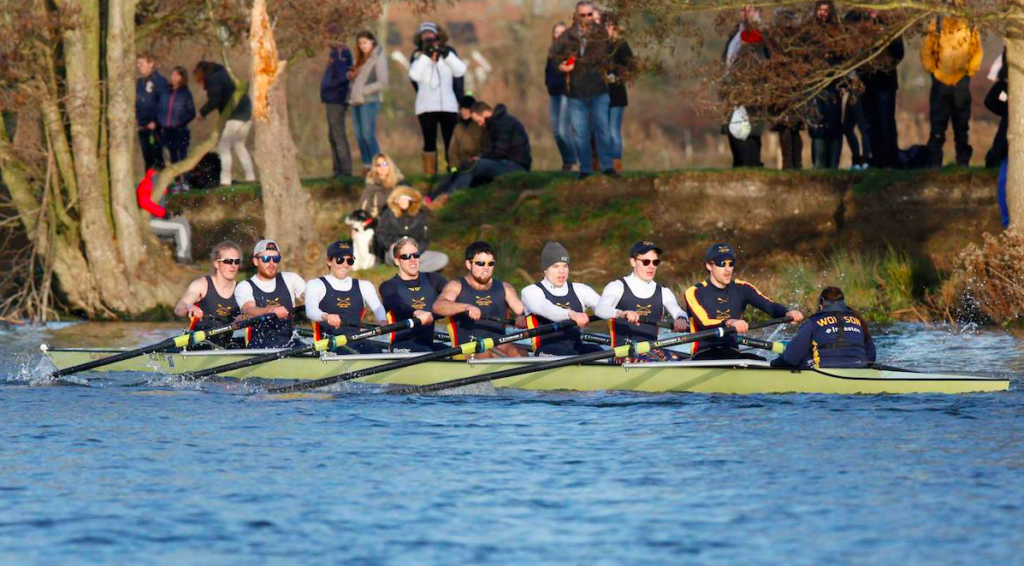