The senior rowers — including “former novices” after Christ Church Regatta — train year-round under the direction of the Men’s and Women’s Captains and coaches. During Hilary and Trinity Terms, the crews are focusing on the major bumps races, Torpids and Summer Eights. In the holidays and Michaelmas term, seniors form ad-hoc crews to enter external regattas, keep in shape, and be ready to pounce when bumps season returns.

Wolfson has crews available for any level of fitness or commitment. Our top men’s and women’s crews have six or seven intense training sessions per week, while our “lowest” boats may only row once per week when the weather is nice. The only way to find out whether there is a crew for you is to come by the river and try it out!

The men’s and women’s first boats are Wolfson’s flagship crews. They are filled with athletes with the fitness, skill, and dedication — dare we even say obsession — not only to defend Wolfson’s place among the top collegiate crews, but to push ever higher. Though the top boat athletes are at the front of the Pack, rowing for the first boat is not an unattainable goal. Every year, we have at least a few complete novices — who had the dedication to build their fitness and technique throughout the year — race in top positions. Even more often, dedicated rowers will move up to the first boat after building their strength in the lower boats for a year.

Top boat training consists of about 5 training sessions per week during the academic year, building up to 6 or 7 sessions as the major bumps races draw near. The mix of water- and land-based training depends on the crew’s availability and the coach’s strategies. Over the past few years, the men’s first boat (M1) had about four water sessions on weekday mornings and two evening erg sessions. The women’s first boat (W1) found their schedule worked better with three land sessions (including weights at the Wolfson gym) and three water outings on the weekends. These schedules are adjusted annually by the coaches and captains. 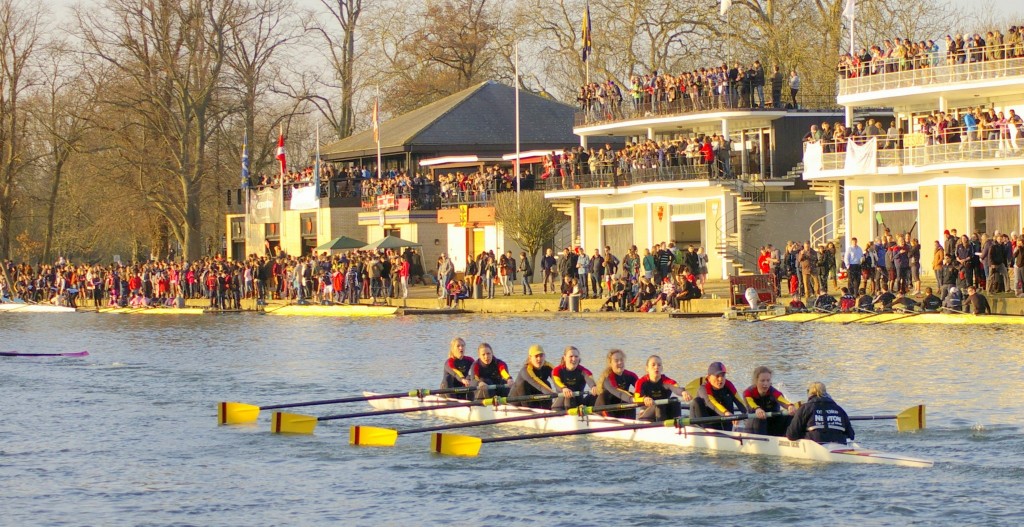 The middle boats are the core of Wolfson’s development. Some of the athletes in these boats are first-year rowers who need a bit more strength and technique before they burst into the first boats. Others are already at a high level, but don’t have time to commit to the full training schedule. This mix of skill levels combined with effective coaching results in rapid improvement from all of the athletes and strong boats on race day. Wolfson’s second boats are always feared and respected wherever they appear on a bumps order.

Second boats often train 3 to 4 times per week, building up to 5 times per week before the bumps races. Two or three water sessions and one or two land sessions are typical. Coaches will often arrange for combined outings between first and second boats, to provide race practice and try different combinations of rowers. Indeed, there is often quite a bit of interplay between the first and second boat squads until just a few weeks before major races. 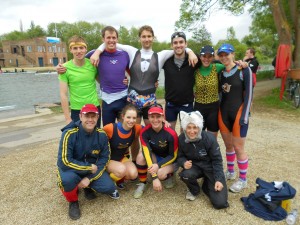 Wolfson’s “fun boats” are also a diverse and fun mix. Some are formed of rowers who really just want to get on the water once a week when the weather is good to get a bit of fitness, but don’t have the time to dedicate to a crew. Others are local alumni who aren’t interested in the full boat club programme, but like to get on the water now and again. Some of these crews enter the bumps races, others just like to have the occasional paddle.

Fun boats may train once or twice a week, and often join the rest of the club for mixed circuits.

Unlike novice training, wherein the general goal of an outing is almost always “learn to row” followed by “learn to row better,” senior sessions are often a bit more focused. Entire water sessions are often spent on one part of the stroke — the blade’s clean entry to the water at the catch, or the muscle mechanics around a strong finish. As routine tasks like balancing the boat become second nature, it is possible to put real mechanical work into outings. This leads to a differentiation between “technique tasks”, which emphasise position and rhythm, and “work tasks”, which build strength and stamina. Our experienced coaches mix these outings to produce stunning results.

Erg sessions are similarly diverse. Repeated sprints of between 250m and 2000m — 1 to 10 minutes — build anaerobic strength and muscle mass for big pushes during a race. Longer erg sessions, lasting about an hour, build aerobic fitness and oxygen carrying capacity while working on the “other half” of the power-to-weight ratio. Pyramids and other hybrid sessions, in which power and stroke rate are varied over a longer session, provide the physical and mental toughness needed to give a hard push even at the end of a race.

Weight sessions, cross-training, circuits, and other exercises build strength without the constraints of the rowing motion, which can be protective against injury when done correctly.